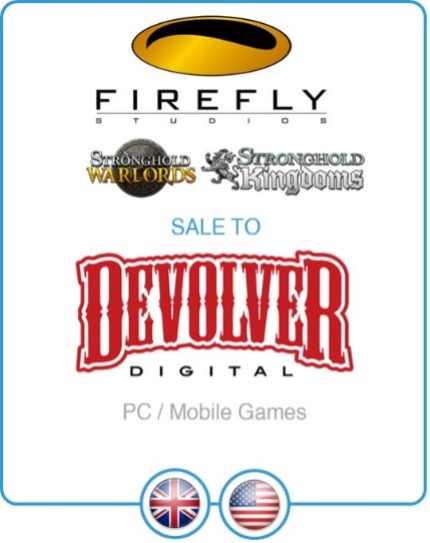 LOS ANGELES | November 8, 2021 – Devolver Digital (LON: DEVO) has acquired Firefly Studios, a PC and mobile game developer and publisher headquartered in London, UK, and focused on both premium and free-to-play games. Firefly is a category leader in the castle-building real-time strategy (RTS) segment and is known for its renowned and evergreen Stronghold series.

“We are very excited to be part of Devolver Digital and the journey forward as a public company listed on the London Stock Exchange. Drake Star did an excellent job running a highly-competitive M&A process and a flawless execution with Devolver Digital. We were very impressed with Drake Star’s deep understanding and extensive network in the gaming and digital media space and are grateful to the Drake Star team for their outstanding work in achieving the right outcome for Firefly.”

Michael Metzger, Partner at Drake Star, commented: “It was a great honor to work with the Firefly Studios team and facilitate an amazing outcome. The acquisition also helped Devolver Digital to achieve an excellent listing on the London Stock Exchange.”