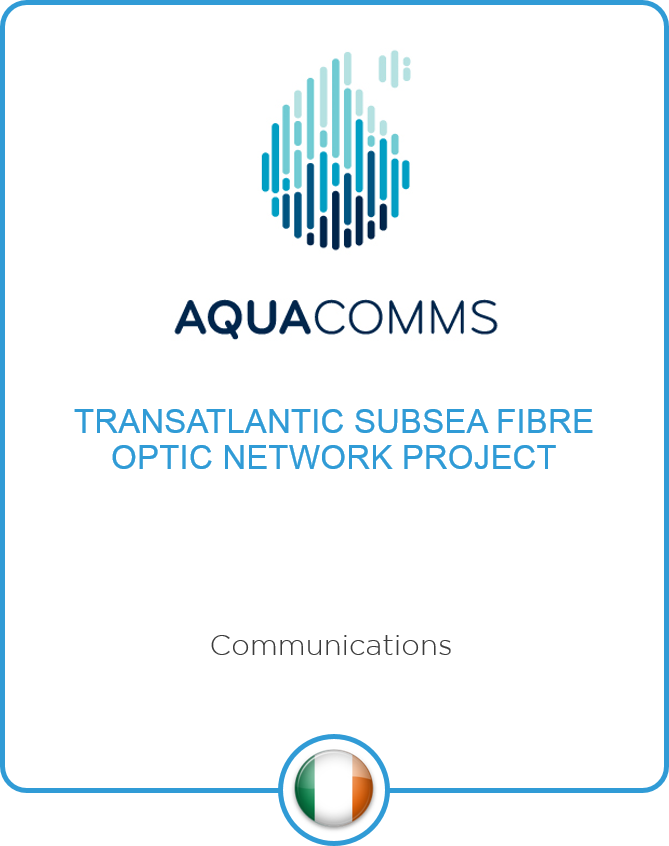 NEW YORK | LOS ANGELES | GENEVA | May 7th, 2015 – Redwood Capital announced that AquaComms Limited (AquaComms), a provider of scalable, subsea capacity-based network solutions, has brought its contract into force with TE SubCom which has begun manufacturing on the America Europe Connect (AEConnect) subsea cable system. AEConnect is scheduled to be ready for service in December 2015, as the latest transatlantic subsea fibre optic cable system connecting North America to Europe with unprecedented capacity and reliability. The initial project cost is expected to be $300 million and is funded in part through a debt offering arranged by Nomura International plc (Nomura). This investment focuses on creating a 5,400 km high-speed data connection between New York and Killala, Co. Mayo that will provide the next generation of subsea connectivity to the UK and Europe utilizing AquaComm’s existing CeltixConnect cable system. The AEConnect Cable System will be able to simultaneously carry over 200,000 4K video and 150,000 8K video channels, along with 20 million 4G mobile callers at the same time.

AEConnect will facilitate the bandwidth requirements of content data centres and will utilise the latest optical technologies to provide the most advanced transatlantic subsea telecommunications system, coupled with a control plane based on innovative Software-Defined Networking (SDN) technologies to serve bandwidth-intensive applications. Featuring the latest technology of 130 Gbps x 100 Gbps per fibre pair, AEConnect will provide low latency connectivity to satisfy the bandwidth requirements of the global data centres, cloud-based networks and content providers. AEConnect is a product of partnerships with TE SubCom and key customers.

“AquaComms’ strategy is to build and operate a diversified, solution based network, providing term and peak capacity product offerings, working in partnership with its contractors, equipment suppliers, backhaul network providers and customers to support the US’s and Europe’s expanding data requirements of today and for tomorrow, ultimately offering ‘infrastructure as a service’” says Greg Varisco, COO of AquaComms. “AEConnect is currently being constructed using state-of-the-art technology, with 100G-coherent design for low latency, reliable delivery for even the most bandwidth-hungry applications and direct data centre to data centre connectivity across the Atlantic.”

Killala was chosen for the landing of the cable due to its unique seabed topography allowing for the shortest possible route as it travels from New York and overland to Dublin and onward to the UK. The region and other areas along the overland route are seen as prime locations for content data centres which will be AquaComms’ key market.

The manufacture and laying of the fibre optic cable will be completed by December 2015 with the first transmission of live data expected in the first quarter of 2016.

Welcoming the announcement Taoiseach Enda Kenny promised the full cooperation of Government and all State Agencies in ensuring that this key project which is of national strategic importance is completed on schedule saying “This is an important step in making Ireland the best small country in the world in which to do business.”

AquaComms Limited (AquaComms) is the owner and operator of the transatlantic cable AEConnect and the Irish Sea cable CeltixConnect, and was established to build, acquire or merge with subsea fibre optic cable networks to provide capacity networking solutions to the global media, content providers and IT companies.