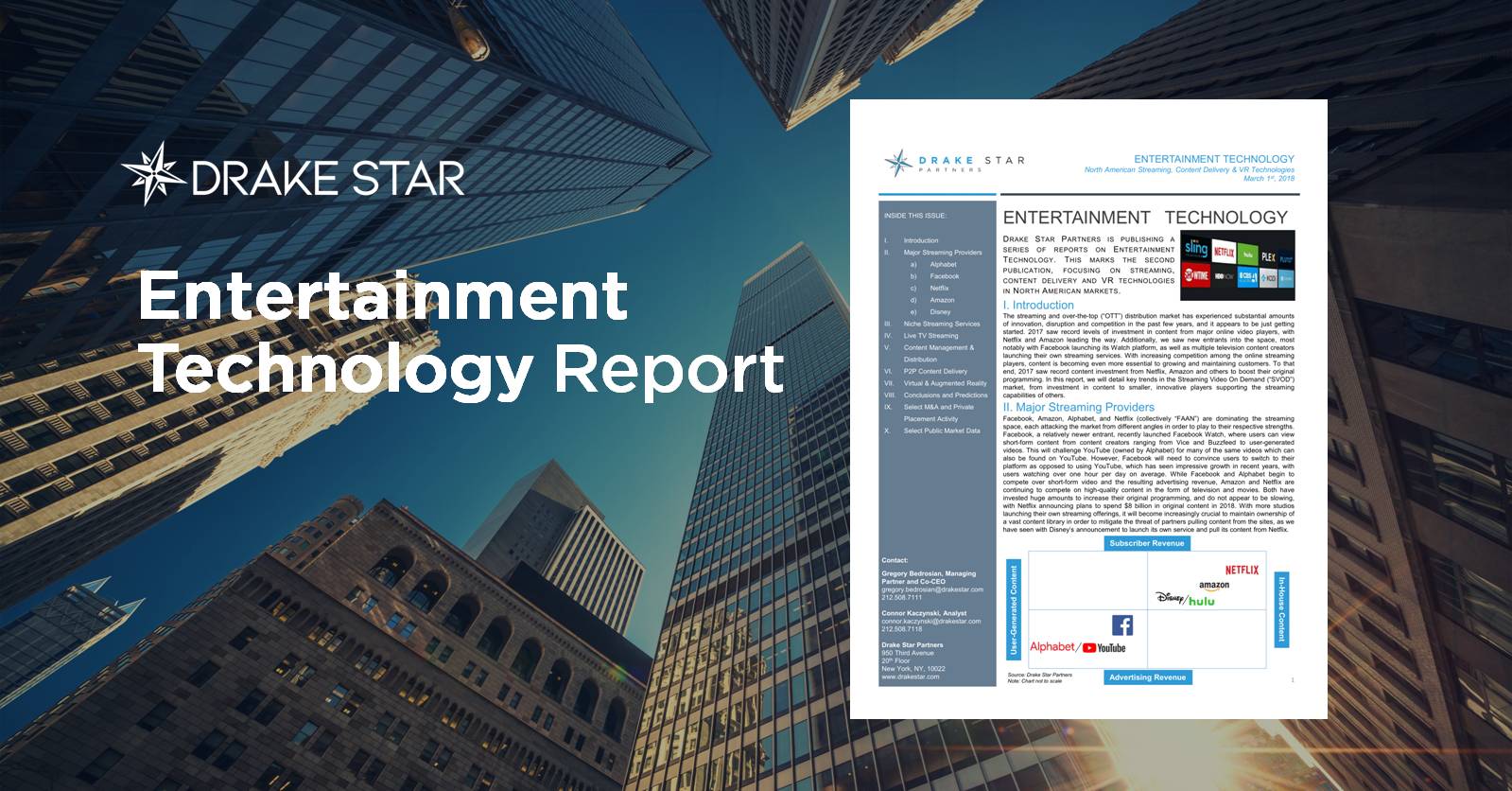 This second entertainment report is focused on streaming and over-the-top (“OTT”) distribution markets, their disruptors, and competitive landscapes over the past few years. 2017 saw record levels of investment in content from major streaming players, with Netflix and Amazon leading the way. In the meantime, Alphabet’s YouTube and Facebook’s Watch platform continue to gain share in the user-generated segment of the market. New, innovative companies are entering this arena, launching their own streaming services, thus increasing the competitive landscape.

Mr. Bedrosian joins a panel that will be discussing the topic of “VCs, Private Equity and Corporate Investments: The Funding and Accelerating of the Digital Marketplace”. He joins a group of influential players in the media, entertainment and finance worlds. They will be looking at growth areas in the media industry, highlighting value creation opportunities, identifying major investment players and where the space is headed.

Commenting on the release of Drake Star Partners’ latest Entertainment Technology report, Mr. Bedrosian said: “With the media industry as a whole currently undergoing significant change in conjunction with our ongoing M&A and corporate finance work at Drake Star Partners in this sector, I felt compelled to publish a follow-up report on Entertainment Technology, this time focusing on streaming and VR. It is an exciting time to be active in these fast-moving industries as it allows us to share our sector knowledge along with key trends we witness along the way. These trends and predictions highlighted in this report are likely to continue and may even accelerate during 2018.”

Regarding his upcoming speaking engagement at Media Summit New York, Mr. Bedrosian added: “It is always exciting to join a series of industry conferences as a panelist, particularly when the event carries such a strong and prestigious reputation. This is obviously a timely opportunity for us, having just released our latest Entertainment Technology report. As such, I look forward to discussing with other panelists the investment landscape within the digital and media marketplaces during Digital Hollywood’s upcoming Media Summit conference, in New York."

Digital Hollywood debuted in 1994 and has from its start been among the leading trade conferences in its field with over 15,000 top executives in the film, television, music, home video, cable, telecommunications and computer industries attending the various events each year.