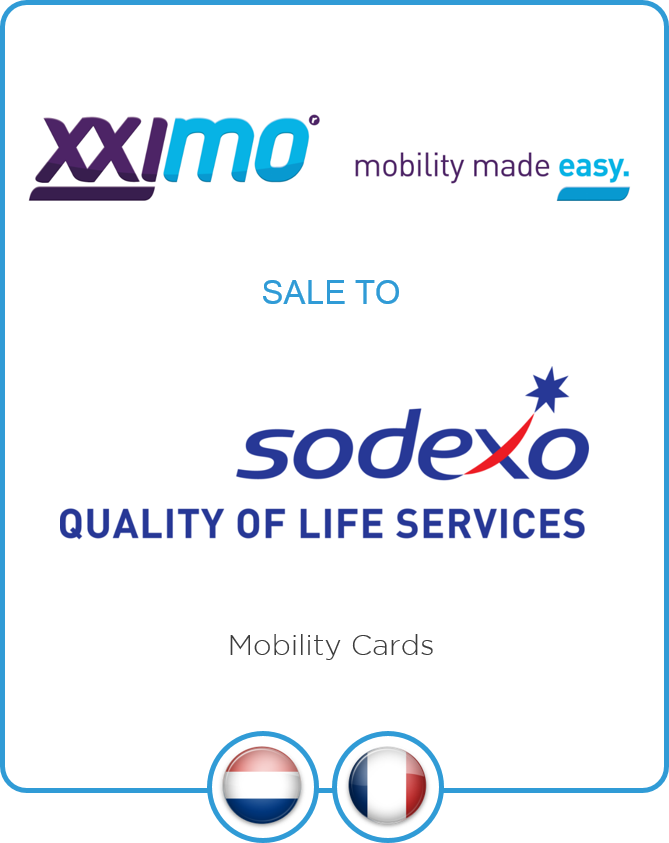 The French listed multinational company Sodexo acquires Dutch fintech startup XXImo.
XXImo is the company behind the successful XXImo mobility cards and its managed services suit that support multi-modular business travel and expenses while relieving businesses from all the hassle associated with expense notes. On top of paying for fuel, charging, car and bike sharing, toll and parking, the XXImo solution lets users travel by public transport, use the national taxi service and Uber, while also making reservations for meeting rooms, hotels and flights.
XXImo has developed a proprietary platform and merchant network that make it possible to digitalise the whole expense process, from transaction, authorisation and cost allocation to direct processing in the accounts.
LD&A Jupiter assisted and advised the company during the process with various international companies showing a strong interest in acquiring XXImo.
After a thorough selection process, the decision was taken to select the company offering the best support for international growth. Sodexo convinced XXImo that its international expansion would be considerably accelerated as a part of a global organisation that already counts tens of thousands of business customers to whom XXImo's services can be offered. The XXImo headquarters will remain in Den Bosch in The Netherlands and founders Patrick Bunnik (CEO) and Lex Broekhuizen (CFO) will retain their current positions.
Friedwart Barfod, Founding Partner of shareholder Tendris Holding, says: "it's a great pleasure for all stakeholders to build a future with such a great company as Sodexo with whom we share the same values. We thank the LD&A Jupiter Team and we are grateful for the support, the quality of their work and the creativity we needed at some time during the process."
Frank Verbeek, Managing Partner LD&A Jupiter Amsterdam, explains: "we are delighted to have worked for such a disruptive company as XXImo enabling the business to further grow under the wings of Sodexo. We are extremely proud of the value that XXImo adds to the total equation in Sodexo's strategy."
About XXImo
XXImo offers a digital platform that enables its users to plan, administer and pay for all forms of business travel. XXImo's mission is to make mobility easy while travelling and when managing expenses.
For more information, please visit www.xximo.com
About LD&A Jupiter Amsterdam
LD&A Jupiter Amsterdam is part of LD&A Jupiter, a top-tier international corporate finance firm which focuses exclusively on transactions within the digital sectors (internet, software, telecom, tech). With offices in London, Munich, Paris, Berlin, Amsterdam, plus New York and Los Angeles via LD&A Redwood, LD&A Jupiter has a presence in the most important financial and digital technology hubs. LD&A Jupiter has completed over 120 transactions of which 70% has been cross border, including cross-continental to America and Asia.
For more information, please visit www.ldajupiter.com