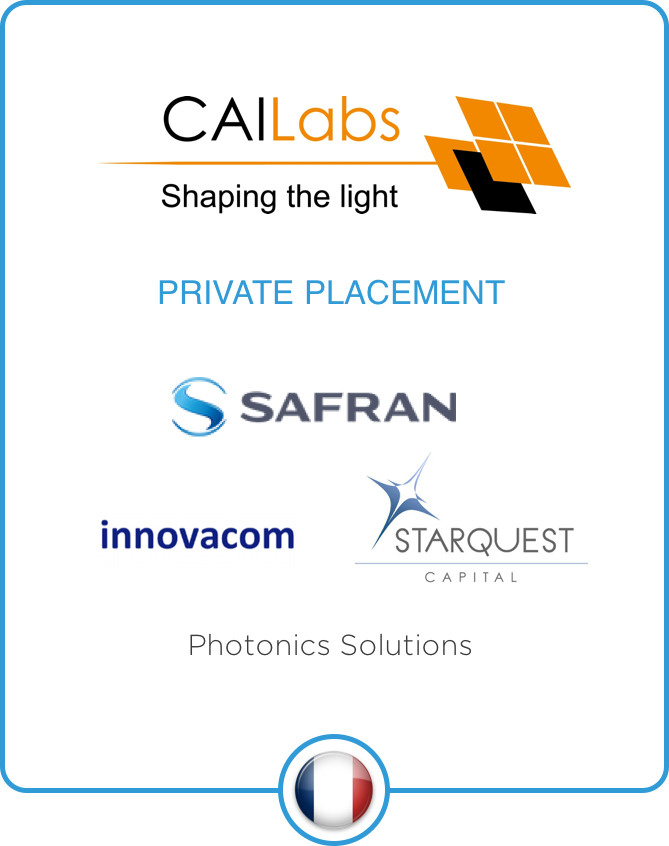 Founded in 2013, CAILabs is a spin-off of the Kastler Brossel laboratory (a joint research unit of Ecole Normale Superieure – Universite Pierre et Marie Curie – CNRS) specialized in physics and quantum optics. Developer of a patented breakthrough light shaping technology, CAILabs conceives and sells photonics solutions in the form of components, modules or devices for the laser and telecommunications industries. Drake Star Partners acted as an exclusive financial advisor to CAILabs in this transaction.

Safran led a €5m fundraising, subscribed by Safran Corporate Ventures and the current shareholders. This fundraising will support CAILabs’ industrial and commercial development along with its international expansion.

Jean-François Morizur, CEO & co-founder of CAILabs, commented: “CAILabs has grown by 160% in 2016 and experiences a flourishing year in 2017 in both local area networks deployments and its growing number of industrial partnerships outside of telecommunications. CAILabs’ project with Safran, which consists of a new cabling architecture for the next generation of airplanes will be completed in 2017 as well.”

CAILabs had already raised €3.5m from specialist funds such as Innovacom and Starquest as well as business angels. Sandrine Vergnory-Mion, Principal at Drake Star Partners, said: “This €5m investment is a major step forward to support CAILabs’ objective to spread its unique technology worldwide.”

Francis Lorentz, Chairman at Drake Star Partners France, added: “Drake Star Partners is very proud of its involvement in the private placement by a major French aerospace player into a growth company whose disruptive innovation based on quantum optics can be leveraged in aeronautics as well as the industrial and telecommunication markets. This operation is a great example of the complementarity between the power of major corporations and the agility of growth companies.”

Safran Corporate Ventures is Safran’s corporate investment arm, aimed at financing startups or innovative SMEs. Since its foundation in April 2015, it has contributed to the funding of seven disruptive companies, operating in Safran’s areas of expertise such as Embedded Systems, Materials, New Services or New Flying Platforms.

Pioneer of innovative capital in France, Innovacom has invested c. €1bn since 1998 to support hundreds of startups in the digital field.

Recognized as a specialist of groundbreaking technology projects, Innovacom contributed to dozens of IPOs, and around 150 industrial divestitures including some of the most emblematic French innovation success stories such as Business Objects, Inventel, Soitec, Aufeminin.com, and Digitick. Its latest successes are related to various fields like videogames (Owlient), medical imagery (Olea Medical) or lately smartphones components with Heptagon.

Innovacom is an independent investment capital company certified by the AMF.

Starquest is a capital investment structure dedicated to industrial innovation. It supports more than 100 startups, putting stress on efficient energy supply, cyber security and high-value added industrial components. Since 2008, the core ethos of Starquest has remained the same: Human before Excel, a rigorous strategic analysis before business plans. Starquest has become one of the major venture capital players in France, accomplishing more than 15 operations per year.